Fall for the entrancing and mysterious allure of the Tahitian South Sea Pearl. A captivating gem with an unmatched depth and palette of complementary colors. 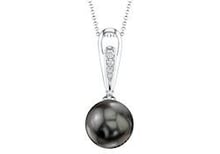 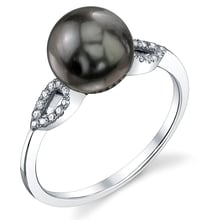 Use this simple and easy 3-step guide to find the perfect piece of pearl jewelry for that special someone.

Here's what our customers have to say about their experience with us. Over 10000 reviews and counting.

From pearl type to pearl sizing, we'll educate you on everything you need to pick the perfect jewelry piece.

From French Polynesia To The World – How are Black Tahitian Pearls made?

When a tiny bead is placed in the black lip pearl oyster with surgical precision, it forms a pearl sac which then “coats” the nucleus with crystalline nacre layers to form the beautiful Tahitian Pearl as we know it.

This process can take over a day, with the pearl farmer waiting patiently until the nacre is thick enough to be able to produce pearls.

Despite pearl farmers in French Polynesia experimenting with their black pearls in Tahiti as far back as 1961, it was not until 1972 that they started being exported from French Polynesia across the world

The Colors of Tahitian Pearls

This is perfect if you are looking for a unique alternative to Akoya Pearls, which in contrast come in white and grey colors with pink overtones.

Tahitian Pearls are the only pearls that come in a full array of colors. Black Akoya Pearls, for example, are dyed. This is what makes Tahitian Pearls so special because the rainbow-like mantle of the Pinctada margaritifera has the ability to produce a “rainbow” of natural colored pearls.

The beautiful, darker colors of a Tahitian Pearl are more precious than those of black Akoya Pearls and other dyed pearl types. This is perhaps due to the fact these gems come from the black pearl oyster and their coloring is, therefore, more natural than the black Akoya.

Magical in their allure, when you wear true Black Pearls you’ll notice how their surfaces shimmer and shine as they refract the light.

Choosing the perfect Tahitian Pearl color for your style

Remember that although Tahitian Pearls derive from the black lip pearl oyster, you don’t have to choose pure black pearls. Tahitian Pearls with graphite and metallic silver hues, or those with green, blue, and purple overtones make a striking wardrobe statement if you are someone who likes to stand out.

The beauty of Tahitian Pearls is also further accentuated when they are worn with Akoya Pearls, as it highlights how unusual their color palette is compared to the traditional white, pinkish pearls on the market.

There are many different Tahitian Pearl sizes and shapes, including button, pear, and oval and baroque pearls, the latter of which looks particularly graceful when worn as a pearl necklace.

Less than 10% of harvested pearls are round, making Tahitian Pearls some of the most sought-after gems in the world.

The Value of Black Tahitian Pearls

Because black-lip oysters can grow to be over a foot in diameter, they tend to produce black pearls that are very large and, therefore, very valuable compared to smaller Akoya Pearls.

These are very sensitive oysters, which makes their culturing process a hit and miss. As a result, Tahitian Pearls are rare and expensive to produce. Jewelry featuring Tahitian Pearls is generally high-end, making them perfect gifts for weddings, graduations, proms, special birthdays, anniversaries, and more.

Pearl farmers aim for creating perfectly round Tahitian Pearls. Yet, less than 10% of the harvested cultured pearls produced are round. Baroque cultured Tahitian Pearls are some of the most valuable, sought-after gems in the world. The unique shapes and striking beauty of Tahitian Pearls make for incredible jewelry pieces.

Where does the cultured Tahitian Pearl originally come from?

Although produced in French Polynesian waters, Tahitian Pearls are not actually from Tahiti itself. The black lip oysters are usually nucleated with beads in the Gambier and the Tuamotu Archipelago Islands before mother nature takes over from there.

How to wear and style your Black Tahitian Pearls

The wide color spectrum of the Tahitian Pearl makes it seamless to match with other items in your wardrobe. Whether you choose classic round gems or baroque pearls, Tahitian Pearl earrings add a flattering touch to an evening ensemble, while a Tahitian Pearl necklace can elevate a simple satin dress into a stunning outfit for a formal occasion.

Similarly, a Black Tahitian Pearl bracelet looks elegant when worn alone, stacked with other fine jewelry pieces or coordinated with a stunning pair of studs or pearl dangle earrings.

Why choose Tahitian Pearls over other types of pearls?

Tahitian Pearls are rare and expensive to produce, making the jewelry that contains them popular for special occasions or as heirloom pieces.

With black-lip oysters known for being able to reach over a foot in width, they are responsible for producing one of the largest black pearls in the industry. This is why Tahitian Pearls hold such great value.